The Best Mountains for Late-Season Skiing

As the weather warms and the snow begins to melt, we begin to fear the inevitable: the end of the ski season. Though many mountains in the area utilize snowmaking machines during the season, the man-made snow can’t stand up to warmer temperatures. However, some mountains stay open later in the season than others, providing the opportunity for the universally loved spring skiing. If you don’t think you can ski in shorts and a long-sleeved t-shirt, visit one of these mountains in mid- or late March—you’ll see what we mean.

Smugglers’ Notch Resort—Though a bit of a drive from New Haven, Smugglers’ Notch shines in the spring weather. In addition to weekly parking lot parties and Village celebrations, they celebrate March with weekly fireworks. Later in the month, the resort hosts its MapleFest celebration, sponsoring tours to local maple sugarhouses, themed snowshoe and walking treks, dining specials, and maple tastings. They generally stay open through the end of March and into April; pack up and enjoy a weekend trip to Vermont!

Mohawk Mountain Ski Area—Right in our backyard! Located in Cornwall, Connecticut, this resort features a new lodge, great snow (both real and handmade), and challenging trails. Mohawk is generally the last mountain to close for the season, and its proximity to New Haven makes it an excellent option for day trips.

Mount Snow—This wonderful resort is closer than you might think; though technically in Vermont, it is located in Dover—just across the Massachusetts boarder. The mountain boasts one of the most advanced snowmaking operations in the country. They also house the state’s only bubble lift, which transports skiers and riders up the mountain in a blue plastic dome, shielding them from cold winds, icy snow, and—in the spring—the occasional rain.

Bromley Mountain—Bromley typically receives at least two feet of snow during the month of March, generally staying open through the first weekend in April. To celebrate their extended season, they offer a generous deal—The Spring Loaded Card—which offers four days of skiing and riding for $119. 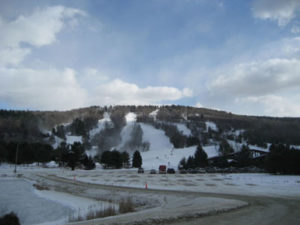